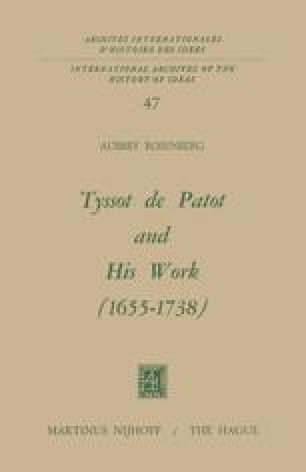 In trying to evaluate the novel as a work of literature 1 I shall refer mainly to the work of Atkinson, the only critic to have discussed, in some detail, the literary aspects of Jaques Massé. Atkinson was encouraged by Lanson to make a study of the imaginary or, as Atkinson was to call it, “extraordinary voyage” in French literature. His first book was devoted to the voyage before 1700 and included sections on the work of Foigny, Veiras and Fénelon. The second book, published in 1922, dealt with the period from 1700 to 1720 and included a section on Tyssot in which he attempted to assess, not only the ideas and their sources, but also the literary techniques Tyssot used in his two novels. In the introduction to his book, Atkinson defined what he understood by the term “extraordinary voyage.” This definition has been challenged on several counts. It is not my intention to participate in this controversy but simply to indicate where the substance of the arguments may be found.

Ideal Society Literary Aspect Religious Section Lyrical Talent Travel Report
These keywords were added by machine and not by the authors. This process is experimental and the keywords may be updated as the learning algorithm improves.
This is a preview of subscription content, log in to check access.