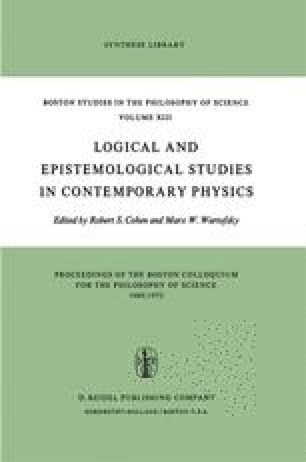 Perception and Philosophy of Science

It is argued that an evolutionary theory of perception and knowledge, and a perceptual philosophy of science is, at present, a realistic and useful way of looking at the whole cognitive endeavor of living beings including man. This theory conceives perceptions, concepts and theories as ways of adapting to the useful regularities of environmental niches, and further extending these niches by exploration. This may lead, at times, to readaptation to less complex niches, etc., but in the case of man the scientific means of observation and exploration seem to lead to ever greater expansion of his environment until, at least mentally, his niche becomes the whole observable universe. Man’s problem of knowledge is thus immensely more complex and also unitary compared to organisms which fill special niches. The task is nevertheless made conceivable because of the few comprehensive, and overriding regularities encountered throughout the universe. In this essay the evolutionary epistemology is assumed, defended and restated and eventually is made the foundation of a partially deductive system from which, with the help of other information of a physical, environmental nature the properties of sensory, perceptual and logico-conceptual organizations are, in essence, inferrable. We hope that this reversal provides further insights into the nature of knowledge and proves to be useful in helping us to create new and better concepts and theories consistent with our own status as products of biological and psycho-social evolution.

Special Relativity Physical Theory Color Vision Lorentz Transformation Color Perception
These keywords were added by machine and not by the authors. This process is experimental and the keywords may be updated as the learning algorithm improves.
This is a preview of subscription content, log in to check access.

Appendix 1. Nature of a Perceptual Theory

Appendix 3. Perception of Light and Color

Appendix 4. Perception of Voice and Musicl

Appendix 5. Theory of Space and Time

Appendix 7. The Problem of the Unity of Physics

Appendix 8. Nature of a Physical Theory

Appendix 9. A Theory of Psychosocial Evolution