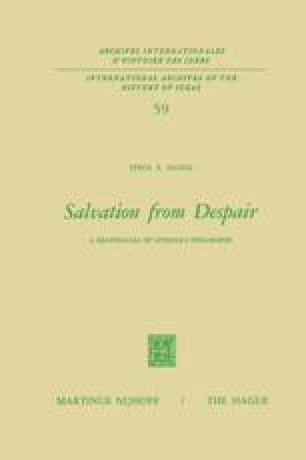 The opening passages of the Treatise on the Improvement of the Intellect made it plain that Spinoza was not embarking upon an enterprise of speculation purely for its own sake. He was not seeking any mere theoretical discovery or pursuing philosophical insight simply as an academic accomplishment. Philosophy was to be for him, as it was for the ancients, a total way of life and one to be preferred to the alternatives of commerce (for the acquisition of wealth) or politics (for the sake of social advancement). He adopted the philosophical way of life as the best and the most desirable, as affording true good or advantage and as constituting real freedom. What this way of life is we have found set out in the fourth and fifth Parts of the Ethics It is the life of reason with all that follows from and is involved in it. But the crown and goal of reason is the knowledge and love of God — the eternal object that fills the mind with joy and excludes all pain, for love, as we are told in the Short Treatise is the union of the mind with its object, and when that object is infinite and eternal the mind will partake of the same sublimity as the object possesses. The twenty-eight proposition of the Fourth Part of the Ethics states that “the highest good of the mind is the knowledge of God.” Thus all philosophy, for Spinoza is ethics, and ethics, in the final outcome, is religion. Whatever we desire and do, of which we are the cause so far as we have an idea of God, or so far as we know God. I refer to “Religion” (Ethics IV, xxxvii, S. 1).

Human Welfare Finite Mode Biblical Criticism Ethic Versus Infinite Mode
These keywords were added by machine and not by the authors. This process is experimental and the keywords may be updated as the learning algorithm improves.
This is a preview of subscription content, log in to check access.