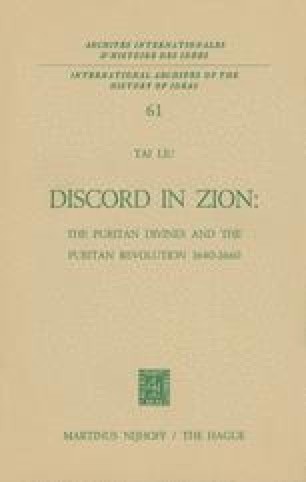 The Dilemma of the Puritan Revolution
Chapter
Part of the International Archives of the History of Ideas / Archives Internationales d’Histoire des Idees book series (ARCH, volume 61)

On December 16, 1653, four days after the collapse of the rule of the saints, Cromwell was made the Lord Protector of England. The ceremony of the day was much after the fashion of former kings. About one o’clock in the afternoon, the procession started from Whitehall to Westminster, and soldiers were posted on both sides of the streets to guard the passage of state dignitaries and the new head of the Commonwealth. First came the Lords Commissioners of the Great Seal of England. Following them were the judges and officials. Next came the Lord Mayor and Aldermen of the City of London all clad in their scarlet gowns. At the end of the procession was the coach of Cromwell who was not attired in military uniform but “in a black Suit and Cloake.” Around the coach of the Lord General were his Life Guard and many chief officers of the Army. At the Westminster Hall, Cromwell was conducted to a high chair in the High Court of Chancery, with the Lords Commissioners of the Great Seal standing on both sides of the chair and the judges next to them. To the right side of the Court stood the Lord Mayor and Aldermen of London; to the left side, the state officials and the chief officers of the Army. Then the Instrument of Government, a written constitution for the new regime, was read and the Lord General took the oath under the new constitution. Upon taking the oath, Cromwell was invited to take possession of the chair and proclaimed as His Highness, Oliver, Lord Protector of England, Scotland and Ireland. The Lord Protector sat down “with his head covered, the Court continuing all bare.” In accordance with the old tradition, the Lords Commissioners delivered to His Highness the purse and seals and the Lord Mayor of London, his sword, which the Protector delivered back to them ceremonially. After a salute, the Court rose and the procession went back to Whitehall. The ceremony ended with a religious service at the Banquet House, in which Nicholas Lockyer delivered an exhortation sermon to the rulers of the new order.

State Paper Conservative Force National Ministry Army Officer Chief Officer
These keywords were added by machine and not by the authors. This process is experimental and the keywords may be updated as the learning algorithm improves.
This is a preview of subscription content, log in to check access.