The Governance of ROME 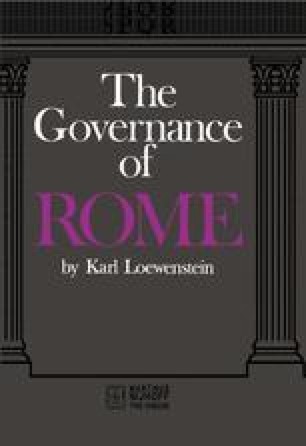 The second, the nonrepublican, period of Roman history is usually divided into two sections. The first, called the Principate, began either with the assumption of full powers by Gaius Octavianus in 31 B.C., or with his death in 14 A.D., and extends to the rule of Constantine (the Great) in 306 A.D. However, it may seem more appropriate to take as the terminal point of the Principate the accession of Diocletian (284–305 A.D.). The second section, called the Dominate, is commonly assumed to have extended from Constantine to the year 476, when a barbarian tribal leader, the Visigoth Odovacer, deposed the last Roman emperor bearing the cynically derisive name of Romulus Augustulus. Yet the Roman empire continued for another millennium as the Byzantine empire in the East until its capital, Constantinople, fell to the conquering Ottoman Turks (1453). Measured by the standards of political history, each one of these three periods is of considerable length compared with which modern political systems appear shortlived. To condense, for the purpose of our approach, these great expanses of time into the relevant essentials will prove a Procrustean assignment.

Full Power Terminal Point Considerable Length Ancient World Political History
These keywords were added by machine and not by the authors. This process is experimental and the keywords may be updated as the learning algorithm improves.
This is a preview of subscription content, log in to check access.