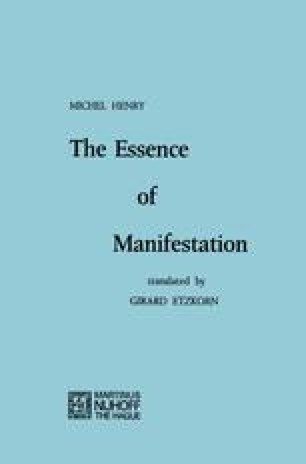 The Essence of Manifestation pp 1-45 | Cite as

The meaning of the Being of the ego is the theme of this investigation. Its goal is to bring to light, to submit to philosophical scrutiny what we mean by ‘I’ or ‘me’ whenever it is a question of ourselves. In recent times, we have become accustomed in philosophy to question ourselves —in a radical way—concerning the things which more often than not present themselves as self-evident, as the things which everyone knows and understands. Does not the ego belong in an eminent way to the realm of the [2] most fashionable and the most banal? It is true that for a long time psychology has made of the ego or of the personality an object of study, the ‘title’ of one of its ‘chapters’. However, concerning the manner in which the idea of the ego is formed in us, concerning its content, concerning its role in the overall picture of the psychic life and other similar problems, we will teach psychology nothing.

Formal Ontology Human Reality Pure Possibility Fundamental Ontology Regional Ontology
These keywords were added by machine and not by the authors. This process is experimental and the keywords may be updated as the learning algorithm improves.

“With the ‘cogito sum’ Descartes had claimed that he was putting philosophy on a new and form footing. But what he left undetermined when he began in this ‘radical’ way, was the kind of Being which belongs to the res cogitans, or—more precisely—the meaning of the Being of the ‘sum’.” (1)