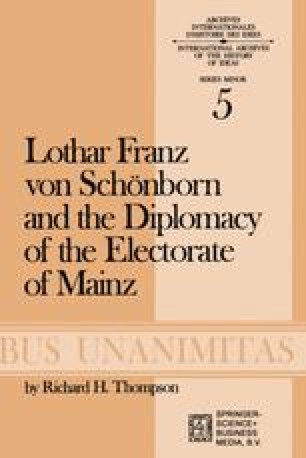 Lothar Franz, the Association and the Peace Negotiations, 1695–1696

After the recapture of Mainz from the French in 1689, several thousand Imperial troops under Count Thüngen garrisoned the town, which was the southernmost crossing of the Rhine still controlled by the Allies.1 The cautious Elector, Anselm Franz, however, did not return to his Rhenish capital; instead, he remained in Aschaffenburg and precipitated a row in the Diet by his loyalty to the Emperor in the matter of the creation of a ninth, Protestant electorate. The other Catholic electors were so incensed over the conduct of Anselm Franz that they refused, for a time, to acknowledge the time-honored position of the Elector of Mainz (or, rather, his representative) as Director of the Diet.2 Anselm Franz, who left the financial affairs of the Electorate in a tangle, had also succeeded, by his excessive loyalty to the Emperor over the creation of a ninth electorate, in putting Lothar Franz in an uncomfortable position when he became Elector. Before 1695, the Bishop of Bamberg had been among the opponents of the ninth electorate; but he had avoided conflict with the Emperor over the matter and declared himself to be satisfied with the assurance given by Leopold that the formal introduction of Hanover into the College of Electors would be postponed.3

Armed State Peace Negotiation Winter Quarter Imperial Court Standing Army
These keywords were added by machine and not by the authors. This process is experimental and the keywords may be updated as the learning algorithm improves.
This is a preview of subscription content, log in to check access.