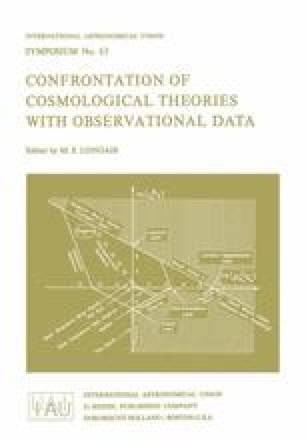 Large Number Coincidences and the Anthropic Principle in Cosmology

Prof. Wheeler has asked me to say something for the record about some ideas that I once suggested (at the Clifford Memorial meeting in Princeton in 1970) and to which Hawking and Collins have referred (Astrophys. J. 180, 317, 1973). This concerns a line of thought which I believe to be potentially fertile, but which I did not write up at the time because I felt (as I still feel) that it needs further development. However, it is not inappropriate that this matter should have cropped up again on the present occasion, since it consists basically of a reaction against exaggerated subservience to the ‘Copernican principle’.

Radiation Pressure Main Sequence Fine Structure Constant Anthropic Principle Gravitational Coupling Constant
These keywords were added by machine and not by the authors. This process is experimental and the keywords may be updated as the learning algorithm improves.
This is a preview of subscription content, log in to check access.