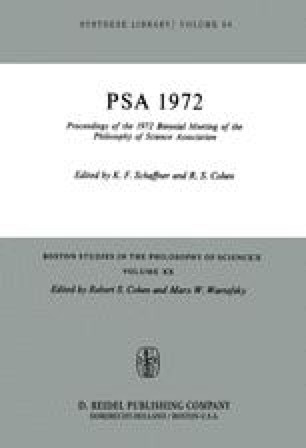 Nowness and the Understandinsg of Time

Chapter
Part of the Boston Studies in the Philosophy of Science book series (BSPS, volume 20)

The phrases ‘Absolute Becoming’, ‘Pure Becoming’, ‘Temporal Becoming’, and ‘Temporal Passage’ which figure so prominently in discussions about time seem to have the same halo of meanings associated with them. Those who say that they believe in the objective reality of Absolute Becoming (or Pure Becoming, etc.) maintain that it is a feature peculiar to time, which distinguishes it from any spatial dimension. They sometimes claim in addition that Absolute Becoming explains some of the facts or alleged facts about time which lack spatial analogue. One such fact is the curious tendency of causes to bring about effects later rather than earlier than themselves. Another is the ‘passage’ of time in contrast to the static character of space, which dynamism may or may not be the same as its supposed ‘arrow’ or ‘irreversibility’ or ‘anisotropy’.1 Then there are the supposed facts that future individuals cannot be referred to, or are not identifiable in quite the same fullblooded way that past individuals are, and that predictions are unlike retrodictions in being necessarily general in logical form, never singular.2 Add to these the past-directedness of memory and traces and the scarcity of future-directed analogues for both, and our relative ignorance of the future as compared to the past.

Indexical Property Personal Pronoun Temporal Extension Identity Criterion Perceptual Awareness
These keywords were added by machine and not by the authors. This process is experimental and the keywords may be updated as the learning algorithm improves.
This is a preview of subscription content, log in to check access.