An Outline of Mathematical Logic 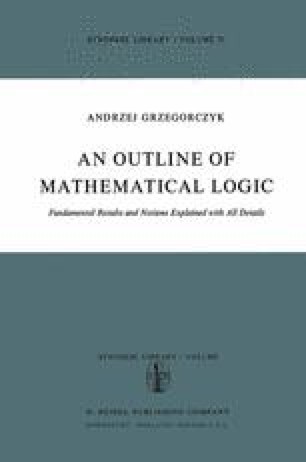 Logic selects inference methods used in science and considered to be correct, and then constructs logical systems on them. These systems are sets of various laws and rules which, when followed, yield all the inferences we can immediately accept. There is perfect agreement in mathematics as to which methods of inference are acceptable and which are not. It does not happen that some people consider some rules of inference to be correct, while others consider them to be entirely wrong. There are only slight differences of opinion about the meaning of some rules and about the extent of their applicability. The set of almost all the methods of inference that are used in mathematics is called classical logic.

Free Variable Predicate Calculus Axiom System Predicate Symbol Universal Quantifier
These keywords were added by machine and not by the authors. This process is experimental and the keywords may be updated as the learning algorithm improves.
This is a preview of subscription content, log in to check access.

Cite this chapter as:
Grzegorczyk A. (1974) The Classical Logical Calculus. In: An Outline of Mathematical Logic. Synthese Library (Monographs on Epistemology, Logic, Methodology, Philosophy of Science, Sociology of Science and of Knowledge, and on the Mathematical Methods of Social and Behavioral Sciences), vol 70. Springer, Dordrecht. https://doi.org/10.1007/978-94-010-2112-8_2