The Cultural Context of Medieval Learning 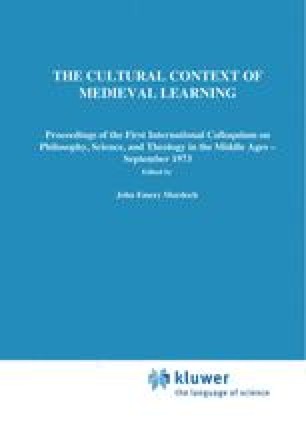 The Cultural Context of Medieval Learning pp 151-192 | Cite as

Chapter
Part of the Boston Studies in the Philosophy of Science book series (BSPS, volume 26)

The culture of a people is discovered in its arts, its institutions, and its lore — in things made, things done, and things said. The culture of a time is the culture of peoples in contact and communication. Culture is a qualification of peoples and an order of “learning,” and learning is both a process of education and an organization of sciences. Sciences are organized and developed in cultures, and cultures are known and characterized by sciences. The interactions and communications of peoples are interpreted from the perspectives of one or another of the cultures in communication or from the perspectives of an outside interpreter. The historian of culture has interpreted the culture of the Middle Ages variously from the time when Renaissance Humanists interpreted it into existence and gave it its name and its dogmatic, verbalistic characteristics, to present day scientific studies based on the invention of a science of culture and the rediscovery of a culture for the Middle Ages in the nineteenth century. The historian of science has interpreted medieval sciences from the time when early modern scientists interpreted them out of existence as sciences, through the discovery of items of observation, method, or theory uncovered in medieval writings as modern science progressed to the present. The history of cultures and of periods and the history of sciences and of discipline are written backwards from present conceptions of culture and present interpretations of science.

Thirteenth Century Twelfth Century Eleventh Century Posterior Analytics Hypothetical Syllogism
These keywords were added by machine and not by the authors. This process is experimental and the keywords may be updated as the learning algorithm improves.
This is a preview of subscription content, log in to check access.