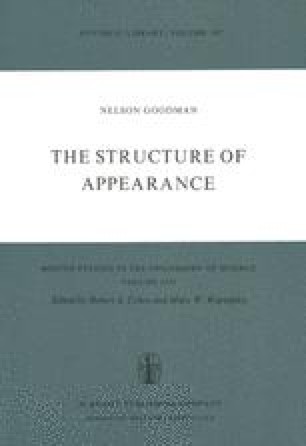 Foundations of a Realistic System

Chapter
Part of the Boston Studies in the Philosophy of Science book series (BSPS, volume 53)

If we divide the stream of experience into its smallest concrete parts and then go on to divide these concreta into sense qualia, we arrive at entities suitable as atoms for a realistic system. A visual concretum might be divided, for example, into three constituent parts: a time, a visual-field place, and a color. The stream of phenomena can be exhausted by division into these and other qualia as well as by division into erlebs or concreta. Other entities, both qualitative and concrete, may indeed be present; but all are to be explained in terms of those taken as basic for the given system. Just as the atoms for a particularistic system may be chosen from among the various sorts of concrete parts of experience, so the atoms for a realistic system may be chosen from among various sorts of qualitative parts. A final choice may be left until the following section. First I want to discuss certain general aspects of the proposal to treat qualia of any kind as atomic individuals. Let me emphasize here that I am not discussing whether qualia are in fact individuals (whatever that might mean) or justifying taking them as individuals (for anything may be so taken), but rather considering advantages and disadvantages of taking qualia as atomic individuals for the system to be described.

Realistic System Proper Part Discrete Part Pearl Harbor Concrete Entity
These keywords were added by machine and not by the authors. This process is experimental and the keywords may be updated as the learning algorithm improves.
This is a preview of subscription content, log in to check access.