Competition and Regulation in Telecommunications 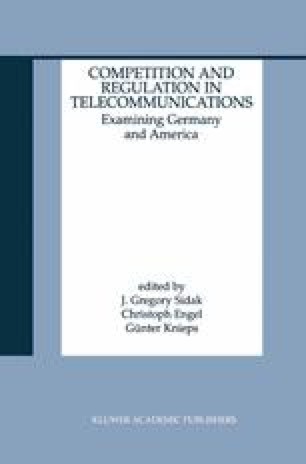 Competition and Regulation in Telecommunications pp 69-77 | Cite as

What is Wrong with American Telecommunications?

For more than sixty years, voice telephony was provided by the American Telephone and Telegraph Company (AT&T) as the franchised and regulated monopoly. Divested of its local operating companies in the 1984 landmark antitrust case, AT&T has become the dominant of three voice and data long distance providers while its former operating companies have become dominant single providers of local service. After nearly three years of telecommunications explicit “deregulation” in the United States, centering on the Telecommunication Act of 1996, there is little to which regulatory officials in charge of such deregulation can point in terms of benefits in the form of lower prices or innovative services. The prospects for rapid improvement are bleak. Whether or not America’s defectively designed regulatory institutions are reparable, it is critical that other nations recognize the American mistakes in telecommunications and strive to avoid repeating them.

World Trade Organization Incumbent Firm Bond Issuance Retail Competition Public Utility Commission
These keywords were added by machine and not by the authors. This process is experimental and the keywords may be updated as the learning algorithm improves.
This is a preview of subscription content, log in to check access.