The Creative Matrix of the Origins 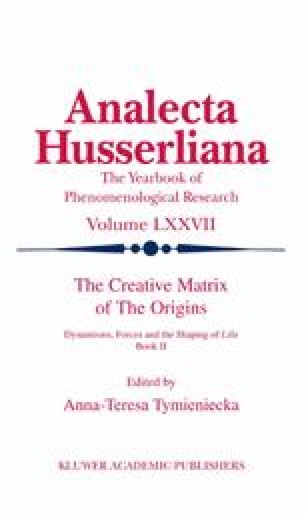 The Literary Work of Art as the Creative Power in Man

On the Margin of Roman Ingarden’s Theory Of Literary Discourse
Chapter
Part of the Analecta Husserliana book series (ANHU, volume 77)

In Roman Ingarden’s aesthetic studies devoted to literature, the category of metaphysical qualities appears only from time to time. The few comments that can be found on this subject are in one of the chapters of the Polish phenome-nologist’s great work Das literarische Kunstwerk, in some of the essays in the posthumously published Książeczka o człowieku (Little Book on Man), and in his dissertations on axiology from the sixties.1 Ingarden describes these qualities in an extremely general manner, using language characteristic of the humanities at the end of the nineteenth Century, which today may seem to us rather imprecise. He thus writes: “These ‘metaphysical’ qualities ... are what makes life worth living, and, whether we wish it or not, a secret longing for their concrete revelation lives in us and drives us in all our affairs and days. Their revelation constitutes the summit and the depths of existence....their revelation is a positive value in contrast to gray, faceless, everyday experience” [LWA, 291]. Moreover, in Ingarden’s reflections the term “metaphysical qualities” is sometimes ambiguous: It appears interchangeably with the notion “the idea of the literary work of art,”2 and sometimes even synonymously with “aesthetic value.”3 In these meanings—of the idea and of the aesthetic value— metaphysical qualities function also in some of the understandings of the “truths” of a literary work of art that were distinguished by the philosopher. Metaphysical quality, resp. aesthetic value, resp. idea refers in them to a characteristic cognitive feature of the artistic subject on the one hand, i.e., it defines “truth” in the semantic sense, while on the other, it marks the “real” literary work of art, i.e., it participates in the pragmatic understanding of “truth” which the phenomenologist also linked with the work itself.

Literary Character Literary Work Aesthetic Experience Intentional Object Aesthetic Object
These keywords were added by machine and not by the authors. This process is experimental and the keywords may be updated as the learning algorithm improves.
This is a preview of subscription content, log in to check access.