Vegetation Degradation in Central Asia under the Impact of Human Activities 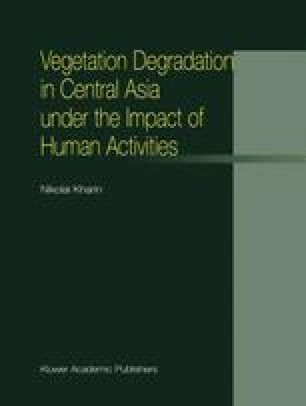 Political, Economic and Social Impact of Land Degradation During the Soviet Period

Communist leaders put task of re-education of people in the spirit of the communist morals. According to the communist doctrine, the human society passed in consecutive order through several stages of socioeconomic development: primitive society, slave-owning system, tribal system, feudalism, capitalism, socialism and communism. The last was considered as the final stage of development, as an “ideal society”.

Land Degradation Cotton Plantation Opium Poppy Soviet Period White Gold
These keywords were added by machine and not by the authors. This process is experimental and the keywords may be updated as the learning algorithm improves.

We shall come to the victory of the Communist labor.

Cite this chapter as:
Kharin N. (2002) Political, Economic and Social Impact of Land Degradation During the Soviet Period. In: Vegetation Degradation in Central Asia under the Impact of Human Activities. Springer, Dordrecht. https://doi.org/10.1007/978-94-010-0425-1_4