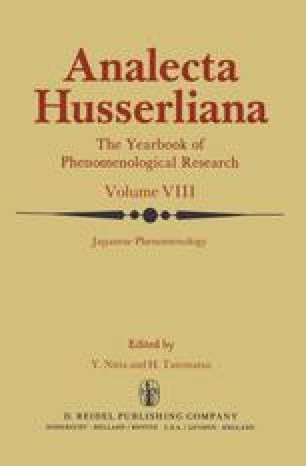 The Kyoto School of Philosophy and Phenomenology

The philosophers of the so-called “Kyota School” can be compared with a solar system, the center of which is Kitarō Nishida (1870–1945). Nishida was called to a professorship at the Imperial University at Kyoto in 1911. Through his teaching and his philosophical writings he played such a preeminent role in Japan’s academic philosophy that many talented philosophers gathered around him. Nishida is almost the only philosopher in Japan who since the Meiji Restoration (1868) built up an independent and original philosophy. His philosophy influenced his students, e.g., H. Tanabe, Baron Kuki, G. Miyake, K. Nishitani, etc1. Therefore this essay treats primarily Nishida’s philosophy and its relationship to Husserl’s phenomenology.

Great Consciousness Unify Power Complete Work External Thing Pure Consciousness
These keywords were added by machine and not by the authors. This process is experimental and the keywords may be updated as the learning algorithm improves.

Translated from the German by Barbara Haupt Mohr.