The Book of Ingenious Devices 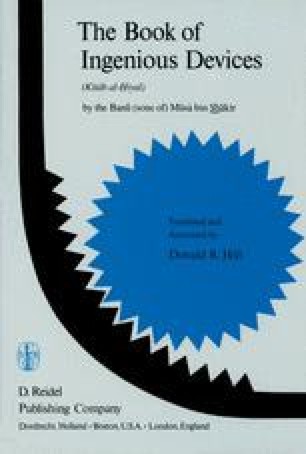 Historical Context of The Book of Ingenious Devices

If the Book of Ingenious Devices had been written in modern times the authorship would probably have been assigned to Aḥmad, with due acknowledgements to Muḥammad and al-Ḥasan for their assistance and encouragement. The Arabic commentators are unanimous in ascribing the work to Aḥmad and, after the mention of all three brothers in the opening of two of the MSS, only Aḥmad is mentioned thereafter. It is reasonable to suppose that Aḥmad was the engineer of the family, al-Ḥasan the geometer, while Muḥammad took a general interest in all the sciences, was the main force behind the collection and translation of earlier works, and also involved himself in politics and public works. Aḥmad’s book was not intended to define and demonstrate basic principles of pneumatics, hydrostatics and mechanics, and should not be judged by its failure to do so. We can be fairly sure, from the list of works written by the brothers or commissioned by them, that they were not unfamiliar with mathematical and scientific principles, and that Aḥmad’s method of presentation was therefore deliberate and not due to ignorance. What he was concerned to do was to describe the machines that he had designed: whether they were constructed by himself or by a craftsman working under his guidance is not particularly relevant. Compared with the Greek works, they contain far less theory and a much greater degree of engineering inventiveness. There is no doubt that Aḥmad was justifiably proud of his ability as an engineer, and that, as Bar Hebraeus implies, many of the devices embodied techniques and mechanisms that were his own inventions.

European Language Reidel Publishing Company Conical Valve Greek Science Control Descent
These keywords were added by machine and not by the authors. This process is experimental and the keywords may be updated as the learning algorithm improves.
This is a preview of subscription content, log in to check access.