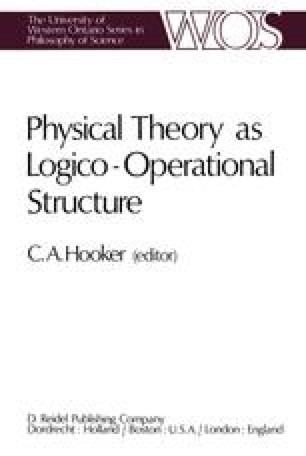 Chapter
Part of the The University of Western Ontario Series in Philosophy of Science book series (WONS, volume 7)

Today we are apt to take the concepts of logic as fixed. For Boole, underlying every class or proposition was a mental act he called an election: the operation of selecting from an arbitrary class the members belonging to the given class, or of which the proposition is true. His laws all concern the effects of these acts of election performed in succession or alternation. He posited that elections are 1. distributive, 2. commutative, and 3. idem-potent. He goes on to say that some will challenge the a priori truth of these laws perhaps, and some might even suspend them, but the resulting system of logic will then be a very different logic from that which we know. First I want to show these laws have indeed been challenged and suspended. So I brought along hardware for physical, not mental, elections for photons; three polarizers, x, y, z at angles of θ = 0, π/2, π/4.

Linear Space Feynman Diagram Semantic Process Lorentz Group Quantum Logic
These keywords were added by machine and not by the authors. This process is experimental and the keywords may be updated as the learning algorithm improves.

Edited transcript of a talk given at the Department of Philosophy, University of Western Ontario, London, Ontario, November 29, 1974