Literature of the Low Countries 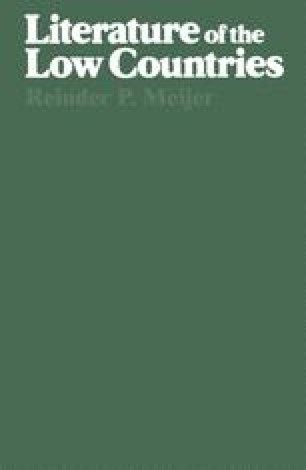 No period in the history of the Low Countries, with the exception of the years between 1940 and 1945, has ever been as miserable as the beginning of the nineteenth century. In the North as well as in the South, national life reached its lowest ebb. The South was ruled by Austria until 1792. Three years earlier, in the year of the French Revolution, there had been a patriotic and vaguely pro-French uprising which had sent the Austrian administrators flying: there had even been a declaration of independence and a theoretical formation of the United States of Belgium. But it had all come to nothing, and after a year of uncertainty and the beginnings of a civil war, Austrian rule had been restored. In 1792 France declared war on Austria; six months later the Austrians were defeated and the southern part of the Low Countries was brought under the rule of France. By 1795 the northern provinces, under the name of the Batavian Republic, were in the same position though with a slightly larger measure of independence.

Nineteenth Century Seventeenth Century Young Writer Bourgeois Society Bible Criticism
These keywords were added by machine and not by the authors. This process is experimental and the keywords may be updated as the learning algorithm improves.
This is a preview of subscription content, log in to check access.