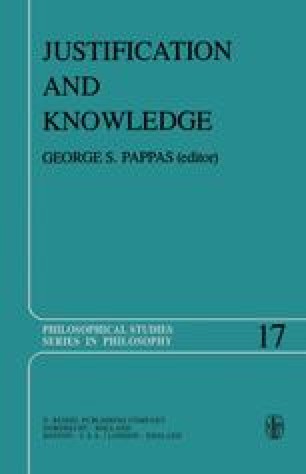 Justification and Knowledge pp 1-23 | Cite as

What is Justified Belief?

The aim of this paper is to sketch a theory of justified belief. What I have in mind is an explanatory theory, one that explains in a general way why certain beliefs are counted as justified and others as unjustified. Unlike some traditional approaches, I do not try to prescribe standards for justification that differ from, or improve upon, our ordinary standards. I merely try to explicate the ordinary standards, which are, I believe, quite different from those of many classical, e. g., ‘Cartesian’, accounts.

True Belief Justify Belief Wishful Thinking Justificational Status Reliable Process
These keywords were added by machine and not by the authors. This process is experimental and the keywords may be updated as the learning algorithm improves.
This is a preview of subscription content, log in to check access.