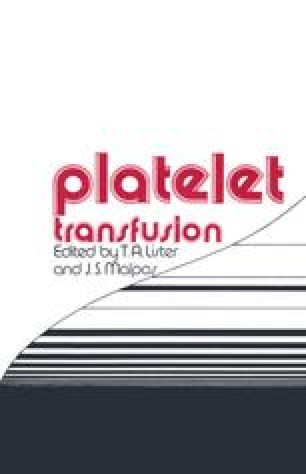 During the second half of 1967, the preparation of cryoprecipitate was introduced at Edgware and within a matter of weeks more than 1000 units per week were being produced. This level of production was maintained until last year when demand fell as a result of the increasing availability of factor VIII concentrates. Also in 1967 I was advised that an explosive demand for platelet concentrates, similar to that for cryoprecipitate was likely to materialize within the next 2 years. A series of consultations and studies followed and in mid-1969 the decision was taken, with some trepidation, to operate an on-call platelet bank rather than to scale-up the ad hoc supply arrangements against demand which had operated hitherto. At that time, technology was far from clear and development of our systems followed some experimental work and rather more guess work. Finance was an overriding consideration and we began with the intention, if at all possible, to utilise the same donation for platelet preparation as for cryoprecipitate production. This meant that we had to rule out techniques which involved additional acid-citratedextrose (ACD), as otherwise factor VIII yields would suffer. This led in turn to a need to avoid platelet concentration against foreign surfaces with consequent aggregation in the absence of increased acidity.

Platelet Transfusion Buffy Coat Donor Unit Component Laboratory Platelet Preparation
These keywords were added by machine and not by the authors. This process is experimental and the keywords may be updated as the learning algorithm improves.
This is a preview of subscription content, log in to check access.