Crossing the Boundaries in Linguistics 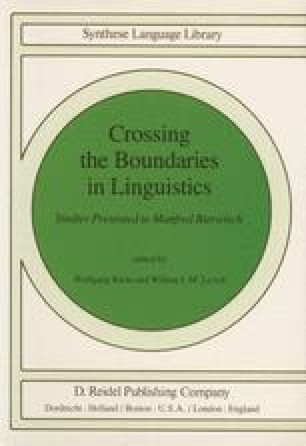 Crossing the Boundaries in Linguistics pp 51-78 | Cite as

Some Rules of Regular Ellipsis in German

The rules of German, as stated in the best available grammars, do not admit sentences like (a) “Karl der Mutter”, (b) “Er gehen”, or (c) “Arnim eine”. But they are perfectly appropriate in certain contexts — for example as the second conjunct in (a) “Otto half dem Vater, — “, (b) “Sie wird kommen, - (c) “Wolfgang aβ zwei Haxen, — “, or after questions like (a) “Wer half wem?”, (b) “Wird sie kommen oder er gehen?”, (c) “Wer aβ wieviele Haxen?” Constructions like (a)-(c) are usually called elliptic. They follow rules. In particular, they are characterized by two properties: first, they require a specific context in order to be appropriate, and second, their total meaning is not merely a function of the meaning of their components, but partially derives from the context. The phenomenon of regular ellipsis is well known, of course, but not too much is known about the rules which govern it. There is indeed a relatively extensive literature about some special cases like “gapping” and “coordination reduction” (for a recent survey, see Neijt 1979), but it is highly restricted both in perspective and range of phenomena covered. This paper is an attempt to approach the field from a somewhat broader point of view. In section 2,1 will discuss in more detail what is understood by “regular ellipsis” and what kind of conditions characterize it. In section 3, five very general rules for regular ellipsis in German are presented and extensively discussed. These rules go far beyond what, to my knowledge, has been said about ellipsis so far, but they suffer from several shortcomings. One of them is connected with intonation; the importance of intonational conditions is demonstrated in section 4. I don’t know what the precise nature of these conditions is. It appears that intonation is the key device to integrate in the utterance itself, on the other. But until we know more about this central process of human language structure it seems premature to formulate specific rules for the intonational structure of ellipsis. So, only some of the problems will be outlined, but no attempt is made to solve them.

Noun Phrase Semantic Condition Pitch Contour Stressed Syllable Verbal Context
These keywords were added by machine and not by the authors. This process is experimental and the keywords may be updated as the learning algorithm improves.
This is a preview of subscription content, log in to check access.