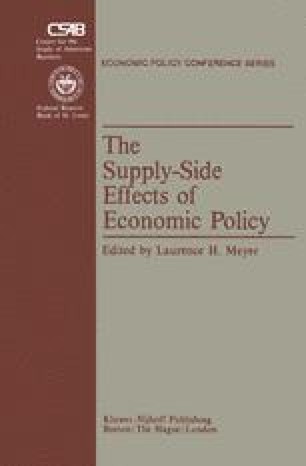 Thoughts on the Laffer Curve

The first part of the paper by Canto, Joines, and Laffer, which is the only part I will discuss, sets up a simple general equilibrium model with two factors (both taxed proportionately) and one output, and proceeds to grind out the solutions. The model, while not entirely unobjectionable, is certainly not outlandish in any important respect. The authors make no claims that the model tells us anything about the U.S. economy; nor do they draw any policy conclusions. They use the model to provide intellectual underpinnings for the celebrated “Laffer Curve”—the notion that the function relating tax receipts to tax rates rises to a peak and then falls.

Home Sector Interest Elasticity Simple General Equilibrium Model Intellectual Underpinning Optimal Taxation Framework
These keywords were added by machine and not by the authors. This process is experimental and the keywords may be updated as the learning algorithm improves.

. . .the ideas of economists and political philosophers, both when they are right and when they are wrong, are more powerful than is commonly understood. Indeed the world is ruled by little else.

© Center for the Study of American Business 1981