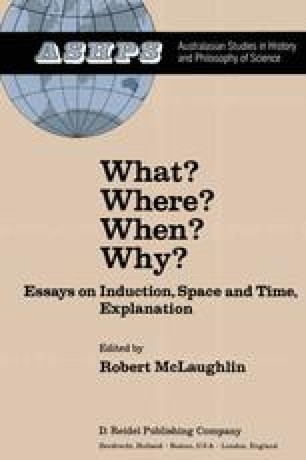 Einstein, Light Signals and the ∈-Decision

It is now three-quarters of a century since the publication of Albert Einstein’s ‘On the Electrodynamics of Moving Bodies’. Early in the spring of 1905, when the idea of his work on relativity was “still a mere concept”, Einstein anticipated which part of his work would capture the imagination of his contemporaries. In a letter of March 6th to his friend Conrad Habicht he wrote of “the electrodynamics of moving bodies by the use of a modification of the theory of space and time” and that “the purely kinematic part of this work will undoubtedly interest you”.1 At the heart of the kinematic part of Einstein’s work lies his discourse on the concept of simultaneity.

Special Relativity Maximum Speed Light Signal Inertial Frame Distant Event
These keywords were added by machine and not by the authors. This process is experimental and the keywords may be updated as the learning algorithm improves.
This is a preview of subscription content, log in to check access.