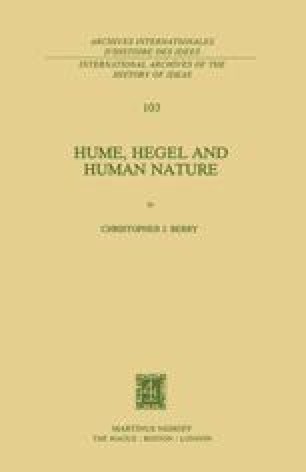 The Constitution of Human Nature

In his anonymous review of his own Treatise of Human Nature, Hume states that the author “purposes to anatomise human nature” (A, 183; cf. T, 263; T, 620; L I, 32) and in the important introduction to the Treatise itself Hume declares, in a striking military metaphor, that the aim of the work is “instead of taking now and then a castle or village on the frontier to march up directly to the capital, or centre of these sciences [logic, morals, criticism, politics] to human nature itself” (T, xx). This is to be accomplished, as the subtitle of the work notifies, by the experimental method, which means “that we are unable to go beyond experience” and “must therefore glean up our experiments in this science [of man] from a cautious observation of human life” (T, xxiii).

Human Nature Human Mind Universal Principle Regular Spring Constant Constituent
These keywords were added by machine and not by the authors. This process is experimental and the keywords may be updated as the learning algorithm improves.
This is a preview of subscription content, log in to check access.