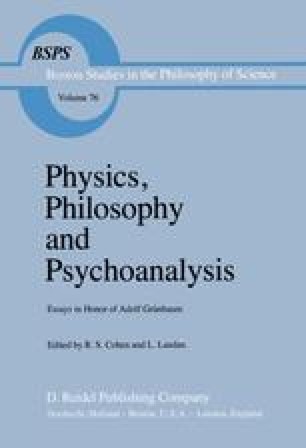 The Demise of the Demarcation Problem

Chapter
Part of the Boston Studies in the Philosophy of Science book series (BSPS, volume 76)

We live in a society which sets great store by science. Scientific ‘experts’ play a privileged role in many of our institutions, ranging from the courts of law to the corridors of power. At a more fundamental level, most of us strive to shape our beliefs about the natural world in the ‘scientific’ image. If scientists say that continents move or that the universe is billions of years old, we generally believe them, however counter-intuitive and implausible their claims might appear to be. Equally, we tend to acquiesce in what scientists tell us not to believe. If, for instance, scientists say that Velikovsky was a crank, that the biblical creation story is hokum, that UFOs do not exist, or that acupuncture is ineffective, then we generally make the scientist’s contempt for these things our own, reserving for them those social sanctions and disapprobations which are the just deserts of quacks, charlatans and con-men. In sum, much of our intellectual life, and increasingly large portions of our social and political life, rest on the assumption that we (or, if not we ourselves, then someone whom we trust in these matters) can tell the difference between science and its counterfeit.

Scientific Theory Seventeenth Century Scientific Status Planetary Motion Logical Positivist
These keywords were added by machine and not by the authors. This process is experimental and the keywords may be updated as the learning algorithm improves.

I am grateful to NSF and NEH for support of this research. I have profited enormously from the comments of Adolf Grünbaum, Ken Alpern and Anddrew Lugg on an earlier version of this paper.