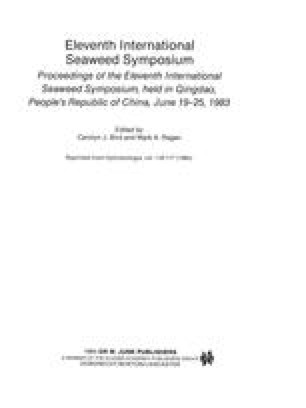 For ages, the Chinese people have been utilizing seaweeds for various medicinal purposes and early records of herbal medical seaweeds appeared in Chinese literature about two thousand years ago. The term herbal medical seaweeds as we use here applies to those which our people have collected and utilized, generally by boiling in water and using the decoction as drugs, and those which are found in Chinese herbal drug stores. For instance in Guangzhou (Canton) and Hong Kong one can readily purchase in local herbal drug stores, ‘Haicao’ (locally pronounced ‘Hoizo’) and ‘Kunpu’ (locally pronounced ‘Guanbo’), respectively Sargassum spp. especially S.fusiforme(Harv.) Setch., and Ulva lactuca L. According to Tseng & Chang (1952), there are 12 genera including 20 species of seaweeds which are of economic value in North China. Two species and two genera of seaweeds are used in herbal medicine: Laminaria japonica Aresch. and Sargassum fusiforme, Porphyra spp. and Ulva spp., of which the first two species were effective for curing goiter, scrofula and dropsy for more than 20 centuries according to the ancient literature in China.