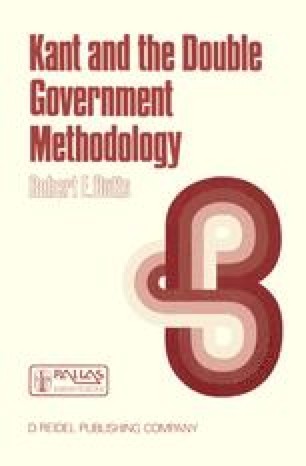 Kant and the Double Government Methodology pp 103-116 | Cite as

Soemmering and Euler: Space and the Soul

By way of introduction to the matters pertaining to Kant’s Critique of Pure Reason that now need to be discussed, I want first to pick up two threads that recurred in ealier chapters. 1) Kant’s problem of evidence or data seemed inevitably to drive him to have to appeal to some respect in which items of experience—at least some of them—occur “outside us”. Kant needs, therefore, an account of an objectively real space (not a merely ideal space, as in Leibniz). As we will see, he also needs to make good his appeal to the required immediacy of the ultimately evidential. 2) We learned that in both Träume and the Inaugural Dissertation Kant came to view the concept of the supersensible (in its many forms: spirits as objects of nonsensory perception, as well as intel1igibilia as nonsensory intuiteds) as surreptitious, as arising by the operation of certain epistemically illicit, although frequently irresistible, processes. Indeed, by 1770 Kant seems to have arrived at the view that subreption takes two forms, one psychological, the other, metaphysical.

Pineal Gland External Object Pure Reason Sick Person Animal Spirit
These keywords were added by machine and not by the authors. This process is experimental and the keywords may be updated as the learning algorithm improves.