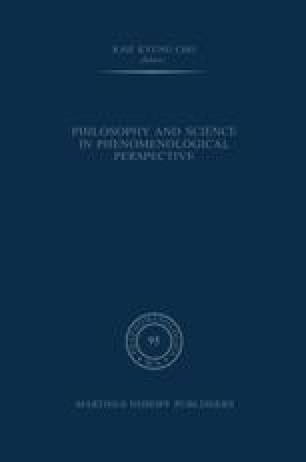 Philosophy and Science in Phenomenological Perspective pp 209-236 | Cite as

Marvin Farber’s Contribution to the Phenomenological Movement: An International Perspective

The prime source for this paper should have been the files of Farber; however, they are inaccessible and may remain so indefinitely. Consequently, I had to rely on a secondary source of great relevance: the voluminous correspondence between Farber and Alfred Schutz. Farber himself assured me in 1975 that, between 1939 and 1959, Schutz had been his foremost collaborator in major organizational and editorial work.1

Founding Member Phenomenological Research Editorial Staff Editorial Policy Literary Estate
These keywords were added by machine and not by the authors. This process is experimental and the keywords may be updated as the learning algorithm improves.

I am deeply obliged to Professor Kah Kyung Cho, who offered me the opportunity to present this paper to the Buffalo conference and made available supporting materials and the draft of an exposition of Farber’s philosophical development, which enhanced my understanding considerably. (Dr. Cho’s manuscript was published in 1982;see References, Cho.) Further, I owe particular thanks to two founding members of the International Phenomenological Society; Herbert Spiegelberg, the philosopher and historian of the phenomenological movement; and Richard H. Williams, the first secretary-treasurer of the journal, Philosophy and Phenomenological Research. Dr. Williams provided technical information about the original structure of the International Phenomenological Soceity which was missing in my sources. Professor Spiegelberg offered access to his important correspondence with Farber; in personal communications he clarified many details on which my other sources were hazy; finally, his publications served as an additional source of information. 1. Farber informed me in 1975 that, during the first period of his journal, he had three main collaborators. They were, next to Schutz, Felix Kaufmann and Herbert Spiegelberg. In addition, there is reason to assume that, at least for the first year, Cairns played a role in the affairs of the journal and, for a longer period, also V.G. McGill, a fellow student of Farber at Harvard, who remained a close friend of his. Since November 1982 the literary estates of Kaufmann and Cairns, at the Centre for Advanced Phenomenological Research in Waterloo, Canada, are again accessible; preparations for their consultation are underway. So far, my efforts to learn something about the preservation and the whereabouts of McGill’s literary estate have been futile. Spiegelberg’s correspondence with Farber was made available only after the gist of the present paper had been presented at the conference in Buffalo at the end of March 1982. As mentioned in my introductory remarks, it served me in checking the general lines of the present expositions, but its exploitation in all its details will have to wait.

From Philosophy and Phenomenological Research

Cite this chapter as:
Wagner H.R. (1984) Marvin Farber’s Contribution to the Phenomenological Movement: An International Perspective. In: Cho K.K. (eds) Philosophy and Science in Phenomenological Perspective. Phaenomenologica (Series Founded by H.L. van Breda and Published Under the Auspices of the Husserl-Archives), vol 95. Springer, Dordrecht. https://doi.org/10.1007/978-94-009-6113-5_16