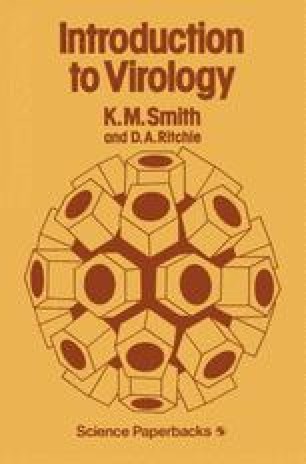 Introduction to Virology pp 5-37 | Cite as

As a first step it will be advisable to define the various constituent parts of the virion. As already stated in the Introduction, all viruses contain nucleic acid, either ribonucleic acid (RNA) or deoxyribonucleic acid (DNA), but never both. The nucleic acid is contained within a coat made up of large numbers of similar protein subunits known as capsomeres. The whole package is called a nucleocapsid. The capsomeres themselves are composed of smaller particles known as structural units. In the case of the isometric viruses, icosahedral (twenty-sided) or near spherical, the capsomeres are arranged in a box-like form, called a capsid.

Virus Particle Tobacco Mosaic Virus Nuclear Polyhedrosis Virus Viral Core Twofold Symmetry
These keywords were added by machine and not by the authors. This process is experimental and the keywords may be updated as the learning algorithm improves.
This is a preview of subscription content, log in to check access.