The Pattern of Animal Communities 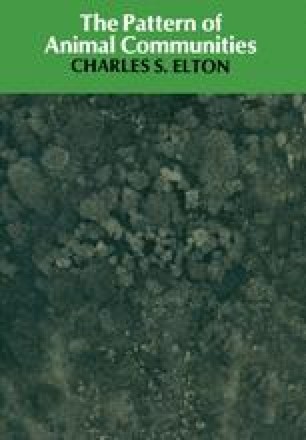 The Ground-plan of Woodland

There Are Three major discontinuities of state in nature that affect animals: between air and water, between water and land, and between the ground and the free air above it. Whereas the first two of these are sharp boundaries (though often not staying at exactly the same level) the last is usually rather a stable interface yet not a sharp one, because — except on quite bare ground — a shallow zone of vegetable detritus, at times continuous in extent, separates the free air from the interstitially aerated soil below. The complexity of this zone is greatest in woodland (especially deciduous woodland), where the plant structures projecting up to form the canopy to a considerable extent determine the general pattern or ground-plan of the communities below. This happens in three ways. First, the canopy partly intercepts and cuts off light and rain, though it also protects the lower strata from extremes of temperature and evaporation. Secondly, it contributes a variety of dead plant materials that fall to the ground to create a number of secondary habitats there. Of these the most conspicuous are the dying and dead leaves that renew the litter zone annually, and the dying and dead wood falling at almost any time as twigs, branches or whole trees, the last often leaving decaying stumps in the ground. Thirdly, there are the vertical movements of animals, as well as whatever they contribute in waste matter and carrion. So, if we adopt a squirrel’s- eye view of the woodland, the canopy pattern can be seen to determine the main outlines of the ground pattern.

Dead Wood Bank Vole Animal Community Grey Squirrel Field Layer
These keywords were added by machine and not by the authors. This process is experimental and the keywords may be updated as the learning algorithm improves.
This is a preview of subscription content, log in to check access.