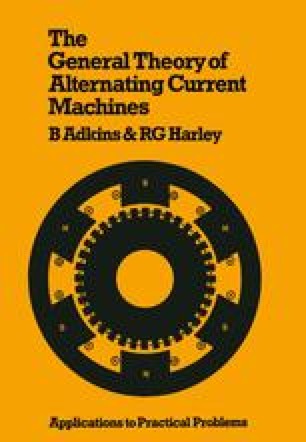 It has been pointed out in Section 4.1 that the two-axis theory of a.c. machines depends on the assumption that the armature winding does not produce m.m.f. space harmonics and does not respond to space harmonics of air-gap flux density. It was shown that this is equivalent to the assumption that the inductance coefficients in the phase equations, expressed as functions of rotor position, do not contain third or higher harmonics, and also that certain relations exist between these coefficients. Where the assumption causes too much error, it is possible to use phase equations in which the higher harmonics are included. The values of the inductance coefficients can be obtained by measurement or calculation, using the principles explained in Section 1.6 to calculate the flux and hence the voltage produced by a given current in any angular position of the rotor. Although the coefficients in the equations are now functions of time, a digital computer can carry out a numerical solution.

Induction Motor Eddy Current High Harmonic Phase Equation Linear Motor
These keywords were added by machine and not by the authors. This process is experimental and the keywords may be updated as the learning algorithm improves.
This is a preview of subscription content, log in to check access.