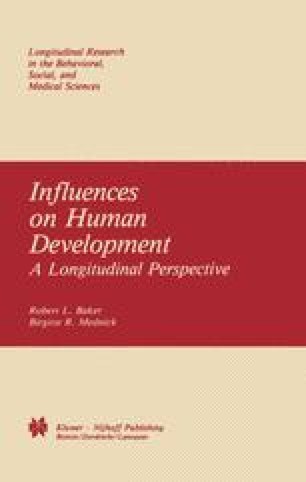 The follow-up: Sample, Variables, and Procedures

The 18-to-23-year follow-up study that formed the basis for the chapters in part II is an example of a study that made secondary use of the data files of the original Danish Perinatal Study. The data base used for the part I chapters was subsequently augmented by additional procedures that were designed to optimize the utility of the original data sets for prospectively viewing the development of the cohort over an 18-to-23-year period. Technically, this constituted a follow-up study of individuals at successive stages of life, as contrasted with a typical cohort study covering a specified period of time [Janson 1981]. The distinction between the two types of longitudinal approaches becomes somewhat blurred in the chapters to follow simply because we attempted to reconstruct at the time of follow-up selected elements and events that intervened between the 1959–1961 perinatal inquiry and the 1977–1981 follow-up of the birth cohort. Selection of intervening data items was based on reliability and relevance.

Data Item Young Adulthood Teacher Rating Index Child Psychosocial Adaptation
These keywords were added by machine and not by the authors. This process is experimental and the keywords may be updated as the learning algorithm improves.
This is a preview of subscription content, log in to check access.