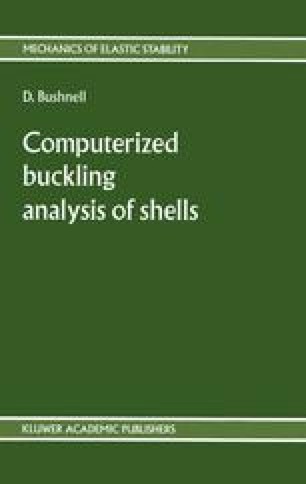 Buckling of prismatic shells and panels

Figure 191 gives several examples of prismatic shells and panels. These are structures the cross sections of which are thin and do not vary in one of the coordinate directions, generally called the axial direction. In this chapter a method will be described in which a computer program for the analysis of shells of revolution can be used to predict buckling of prismatic shells and panels. Results will be given of convergence studies applied to cylindrical shells subjected to external lateral pressure. These studies demonstrate the validity of the technique. The method will then be applied to yield predictions of bifurcation buckling loads of noncircular cylindrical shells under axial compression or external pressure and failure of corrugated and beaded panels under axial compression. The effect of manufacturing processes on buckling and crippling of corrugated semi-sandwich panels of the type from which the rocket payload shroud shown in Fig. 5 is made will be shown.

A discussion of modal interaction in axially compressed columns and panels will follow. One form of this phenomenon has already been illustrated in the case of bifurcation buckling of ring-stiffened cylindrical shells subjected to uniform external hydrostatic pressure (Figs. 181 – 185). It will be shown that buckling loads for optimally designed structures, that is structures configured such that local and general instability occur at the same or almost the same load, are sensitive to initial geometrical imperfections.

The chapter closes with brief discussions of the effect of transverse shear deformations on buckling of panels made of laminated composite material.

Local Buckling Elliptic Cylinder Initial Imperfection Transverse Shear Deformation General Instability
These keywords were added by machine and not by the authors. This process is experimental and the keywords may be updated as the learning algorithm improves.
This is a preview of subscription content, log in to check access.