Studies in the Acquisition of Anaphora 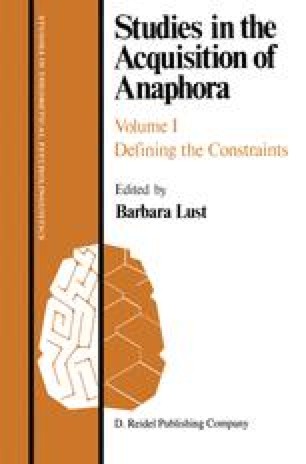 Crossover Between Acquisition Research and Government and Binding Theory: Comments on the Paper by Tom Roeper

As an outsider who tries to keep up with the most salient work in the domain of theoretically oriented acquisition research, I am struck by two general facts. First, compared to, say, fifteen years ago there has been a spectacular improvement in the quality and theoretical relevance of these studies over the past few years. Second, this type of acquisition research appears to remain extremely marginal within the field of developmental psycholinguistics. As for the improvement, there is, I believe, at least one factor which has been instrumental in bringing it about. This is that over the past fifteen years, a number of highly general structural principles have emerged which are more or less agreed upon and which constitute a fertile source for hypotheses that may be testable in acquisition research. As for the persisting marginal status of this type of research, I have no explanations, only regret.

Cite this chapter as:
Van Riemsdijk H. (1986) Crossover Between Acquisition Research and Government and Binding Theory: Comments on the Paper by Tom Roeper. In: Lust B. (eds) Studies in the Acquisition of Anaphora. Studies in Theoretical Psycholinguistics, vol 2. Springer, Dordrecht. https://doi.org/10.1007/978-94-009-4548-7_9