The Moral Sense in the Communal Significance of Life 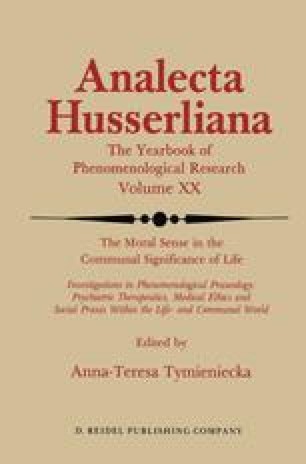 The Moral Sense and the Invisible Object

I accept Professor Tymieniecka’s departure from Husserl and Scheler in her account of the moral sense. I also accept her claims that the moral sense is found in being-with-others and that the moral sense does not originate in constitutive acts by the intellect. I speak within her emphasis on life-development and on “the intimately individual character of ethical practice.” I shall look at one aspect of the issue she raises regarding the moral sense, and that is its relation to psychotherapeutic processes. I must deal with therapeutic processes broadly in these short remarks, ignoring the important differences in different types of therapy particularly in relation to different types of disturbance. I shall not deal, for example, with issues of insanity or schizophrenia or with issues of society and culture in relation to madness and therapy. My remarks lead to questions about the language within which we conceive the issue of moral sense. I want to further the discussion of psychotherapy as a self-interpretive process that engenders moral sensibility, one that begins in a type of relation that is not an act of consciousness, a process that need not be the object of intelligent focus to be effective and generative of moral sensibility. Whether we are dealing with the origin of values when we deal with psychotherapy in relation to the human condition is an issue I will not be able to address. If that question of origin were raised, we would need to deal with the discourse within which concern for origin and universality arises. I shall suggest throughout these remarks that a central question for us is how we speak interpretively of the psychotherapeutic process. Can we speak of it without the dominance of constitutive action by the intellect? Can the process of which we speak speak through our language about it?

Individual Character Cold Weather Therapeutic Process Ethical Practice Moral Sense
These keywords were added by machine and not by the authors. This process is experimental and the keywords may be updated as the learning algorithm improves.
This is a preview of subscription content, log in to check access.