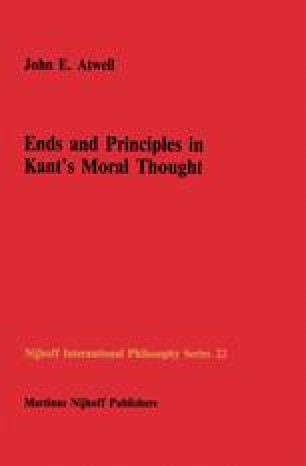 The principle of humanity

Kant expresses the principle of humanity (PH) as follows: “Act in such a way that you treat humanity, whether in your own person or in the person of any other, never merely as a means, but always at the same time as an end” (Gr. 429).1 It is a principle, Kant holds, that would describe the conduct of fully rational beings toward themselves and each other, so it is a principle that should describe the conduct of human (i.e., finite rational) beings toward themselves and each other. Kant suggests in fact that if every human being were to “follow” PH, then there would (noncausally) result a kingdom of ends, ein Reich der Zwecke (ibid., 433). Discussion of the latter idea, or rather Idea (Idee) or even Ideal (Ideal), occurs in the following chapter. Here we shall be concerned with the principle of humanity alone. Previously reference has often been made to PH, and some preliminary work toward explicating it has been accomplished, but no systematic study of the principle as a moral principle — i.e., as a principle designed to guide action and as a criterion for distinguishing right conduct from wrong — has yet been undertaken. That Kant supposes that PH can serve as such a principle and criterion seems clear (see ibid., 429 again).

Rational Nature Moral Criterion Mere Thing Kant State Moral Injunction
These keywords were added by machine and not by the authors. This process is experimental and the keywords may be updated as the learning algorithm improves.
This is a preview of subscription content, log in to check access.