Theology, Politics and Letters at the Crossroads of European Civilization 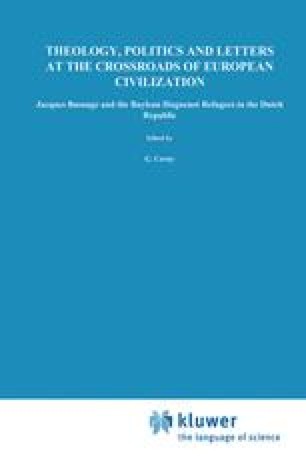 Theology, Politics and Letters at the Crossroads of European Civilization pp 307-314 | Cite as

The largest forced migration of Europeans in early modern times was the Huguenot refugee exodus following the Revocation of the Edict of Nantes by Louis XIV. Of the many foreign lands peopled by the Huguenot diaspora, historians have underscored the seven United Provinces of the Dutch Republic. That one out of three persecuted Huguenots chose to relocate in the Dutch Republic accentuates the importance of that particular Huguenot resettlement. If one excludes Huguenot refugees streaming into Rotterdam before their eventual residence in England or her overseas colonies, the Germanies, and the Scandinavian countries, between 50,000-60,000 French Calvinists found asylum in the United Provinces. In some regions of the Dutch Republic — most particularly in the chief urban areas of the province of Holland — they constituted five percent of the total population. The ease with which these displaced elite persons adjusted to a country whose language was foreign to them was essentially due to earlier French-speaking Protestant communities founded by Walloons from the Southern Netherlands and occasional Huguenots fleeing from France.

United Province Intellectual Achievement Pastoral Letter Early Modern Time Dutch Republic
These keywords were added by machine and not by the authors. This process is experimental and the keywords may be updated as the learning algorithm improves.
This is a preview of subscription content, log in to check access.

Cite this chapter as:
Cerny G. (1987) Conclusion The Role of the Baylean Moderate Party in the Second Huguenot Refuge. In: Theology, Politics and Letters at the Crossroads of European Civilization. Archives Internationales D’Histoire Des Idees International Archives of the History of Ideas, vol 107. Springer, Dordrecht. https://doi.org/10.1007/978-94-009-4343-8_12