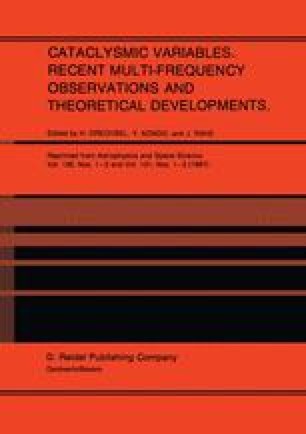 Some Notes On SS Cygni

The results of photoelectric and spectral observations of SS Cyg are briefly discussed. Some features of the spectral variations observed during a large outburst of SS Cyg can probably be explained using a model of a double star which is surrounded by an absorbing gaseous shell. It is noted that the existing data are not numerous enough for the explanation of the SS Cyg variability, in particular, its short-term variations.

SS Cyg is a spectroscopic binary star with a 0.d276 period. The components of this system are dwarf stars (M = 5.m5 for both stars), with dG5 and sdBe spectra; they probably show eruptive activity (Joy, 1956). In the spectrum of the B-component strong emission lines are observed. The dG5 spectrum is observed only in the minimum of SS Cyg.

There are various investigations of SS Cyg, but up to now the cause of its variability, in particular, its rapid variability has not been determined. In addition, there are many other observations which have not been explained.

Light Variation Spectral Observation Double Star Dwarf Star Flare Star
These keywords were added by machine and not by the authors. This process is experimental and the keywords may be updated as the learning algorithm improves.
This is a preview of subscription content, log in to check access.