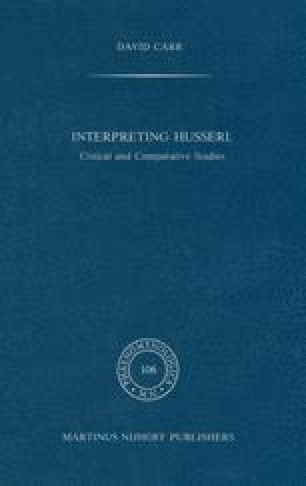 Findlay, Husserl and the Epoché: Realism and Idealism

J.N. Findlay’s estimation of Edmund Husserl seems to have grown with the years. In the 1963 version of Meinong’s Theory of Objects and Values Husserl is still compared unfavorably with Meinong, who is called ‘the true phenomenologist’, while Husserl is rather darkly labeled a ‘realistic subjectivist’ and a ‘cryptosolip- sist’.1 But by 1966 and the appearance of The Discipline of the Cave, Findlay could call Husserl ‘in my view the greatest philosopher of our age’;2 in 1970 (in the Translator’s Introduction to the Logical Investigations) he placed Husserl aming ‘the small number of supreme contributors to philosophy, not unworthy of being spoken of in the same breath with Kant and Hegel, or with Plato and Aristotle’;3 and again in 1975 (in ‘Husserl’s Analysis of the Inner Time-Consciousness’) Husserl is called ‘the greatest of recent philosophers’.4 These are strong words, but Findlay’s greatest praise is embodied in the remarkable fact that, in the full bloom of his own philosophical maturity, when some of his most important works were flowing or about to flow from his pen, he took the time and the pains to translate the whole of the Logische Untersuchungen, an effort for which the word ‘herculean’ can bring only a weary smile to the lips of one who has himself tried to translate Husserl.

Logical Investigation Intentional Object Logical Possibility Real Relation Phenomenological Method
These keywords were added by machine and not by the authors. This process is experimental and the keywords may be updated as the learning algorithm improves.
This is a preview of subscription content, log in to check access.