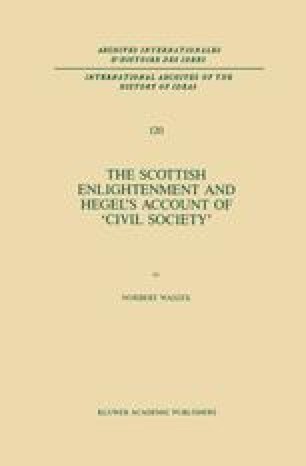 It has become conventional to introduce a study in the history of ideas by giving some indication of the wider relevance of the ideas and thinkers that are being dealt with. The addition of another book to the thousands of studies on Hegel — in the present case a lengthy investigation of one, at first glance, rather obscure source of Hegel’s philosophy, i.e. the Scottish Enlightenment — seems to require special justification. A common way of providing such justification is to stress the vital rôle of the figure under investigation in the history of thought, i.e. to refer to his established place in a ‘sacred’ mausoleum, and then to define the aspect on which the respective study is trying ‘to throw new light’, i.e. to locate one’s own efforts in the front court of the mausoleum. This indirect method of justifying one’s research is perfectly legitimate and, in the case of Hegel, perfectly easy, for very few philosophers would nowadays dare to treat him like a ‘toter Hund’.

Eighteenth Century Planetary Motion Scottish Journal Scottish School Newtonian Science
These keywords were added by machine and not by the authors. This process is experimental and the keywords may be updated as the learning algorithm improves.

To recognize reason as the rose in the cross of the present and thereby to enjoy the present, this is the rational insight which reconciles us to the actual, the reconciliation which philosophy affords to those in whom there has once arisen an inner voice bidding them to comprehend ... (TMK, p. 12 — VRP, Vol. II, p. 73)