Verb Phrase Syntax: A Parametric Study of English and Spanish 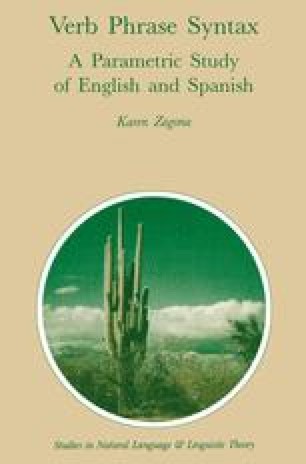 Verb Phrase Syntax: A Parametric Study of English and Spanish pp 93-132 | Cite as

In this chapter, I will analyze constructions with null VP in English, arguing that the temporal features associated with subcategorization licensing of VP are crucial to proper government of the empty category. The core of the analysis is based on arguments of Zagona (1988), which show that VP is properly governed only when INFL satisfies requirements for theta government of VP. The analysis of Chapter 3, according to which VP functions as an internal argument of IP with respect to temporal argument structure, provides a basis for recasting the relevant form of government in terms which specifically concern temporal argument structure. I will call this Tense-government, which thus constitutes an independent type of relation within IP, so that VP may be governed as an argument relative to its Tense-governor, while retaining its status as a nonargument relative to other types of clausal relations, such as predication and antecedent government of non-VP categories. I will then examine constructions with ‘contracted’ forms of auxiliaries, arguing that the interaction of Tense-government and agreement processes provide an account of the restricted distribution of null VP following those forms.

Extended Chain Embed Clause Feature Assignment Small Clause Rightward Movement
These keywords were added by machine and not by the authors. This process is experimental and the keywords may be updated as the learning algorithm improves.
This is a preview of subscription content, log in to check access.