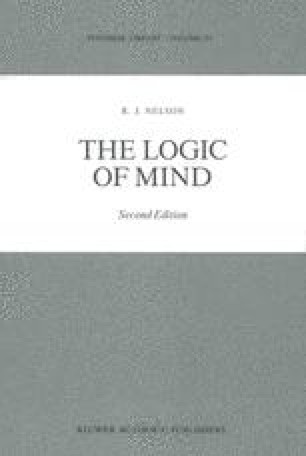 Philosophers and scientists frequently distinguish between the behavior and the structure of an organism. In automata theory the distinction can be made quite exactly, and provides for a concept of level of structure; at the low end is the material structure and at the high the abstract rule structure. Having developed the idea of various levels in relatively sharp form we go on to distinguish between rules that somehow guide and those that just describe a system, and also between models and theories. Finally I defend a realistic thesis: embodied automata rules are really in, or constitute, the mind.

Turing Machine Production Rule Mental Feature Finite Automaton Input String
These keywords were added by machine and not by the authors. This process is experimental and the keywords may be updated as the learning algorithm improves.
This is a preview of subscription content, log in to check access.