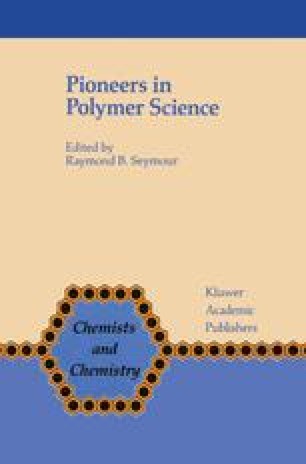 Emil Fischer and most students in qualitative organic analysis were familiar with the reactions of monofunctional isocyanates with alcohols, amines and aldehydes. Otto Bayer, who was manager of research of the IG. Farbenindustrie Laboratories at Leverkusen extended these simple reactions to difunctional reactants and obtained a versatile family of polyurethane fibers, foams, elastomers, plastics and coatings.

Since he recognized the existence of macromolecules, as championed by Hermann Staudinger and was able to produce more wear resistant elastomers than the vulcanized rubber produced by Charles Goodyear, it was appropriate that he be awarded the Hermann Staudinger prize (1973) and the Charles Goodyear medal (1975). He also received many other prestigious awards and was awarded honorary doctoral degrees by six universities in recognition of his unique efforts as a pioneer in polymer science.

Butane Diol Great Discoverer Sebacic Acid Silicon Surfactant Prestigious Award
These keywords were added by machine and not by the authors. This process is experimental and the keywords may be updated as the learning algorithm improves.
This is a preview of subscription content, log in to check access.