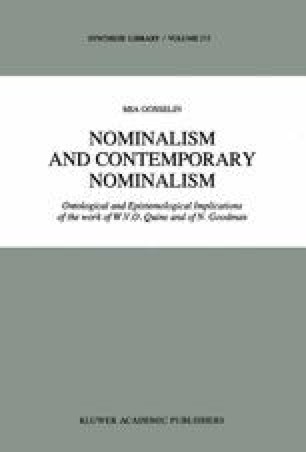 One of the problems in philosophy that occurs time and again is the relationship between thought, language and reality. It can be considered either from an epistemological point of view or from an ontological one. In the Middle Ages three irreducible solutions were proposed, a realistic, a conceptualistic and a nominalistic solution. The realistic theory has found its continuation in idealism, conceptualism has mainly been continued in rationalism and nominalism in empiricism. The fundamental question to which these theories propose different answers is not whether we should accept or reject the existence of abstract entities, or even of an infinite number of such entities, but, as said, is about the link between thought, language and reality.

Ontological Commitment Everyday Language Logical Empiricism Elementary Experience Concrete Thing
These keywords were added by machine and not by the authors. This process is experimental and the keywords may be updated as the learning algorithm improves.
This is a preview of subscription content, log in to check access.