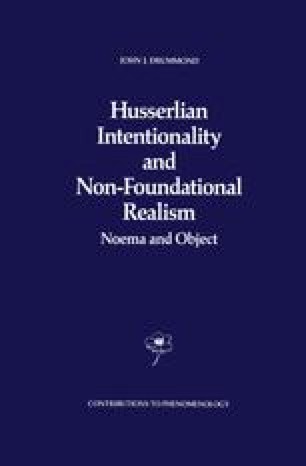 Aron Gurwitsch’s interpretation of Husserl’s doctrine of the noema depends upon a criticism of Husserl’s philosophy of perception, specifically of the distinction Husserl makes between the intentional essence and the sensuous matter within the perceptual act or, in Husserl’s alternate terminology, the perceptual apprehension and its sensuous contents. Gurwitsch contends that this distinction presupposes a phenomenological version of the constancy-hypothesis,1 and his critique rests, consequently, upon a phenomenological reinterpretation of Gestalt psychology’s critique of traditional dualisms in psychology and their adherence to the constancy-hypothesis.2

Intentional Content Intended Object Perceptual Appearance Hyletic Data Empty Intention
These keywords were added by machine and not by the authors. This process is experimental and the keywords may be updated as the learning algorithm improves.
This is a preview of subscription content, log in to check access.

Cite this chapter as:
Drummond J.J. (1990) Contra Gurwitsch. In: Husserlian Intentionality and Non-Foundational Realism. Contributions to Phenomenology (In Cooperation with the Center for Advanced Research in Phenomenology), vol 4. Springer, Dordrecht. https://doi.org/10.1007/978-94-009-1974-7_5