Quantification in the Theory of Grammar 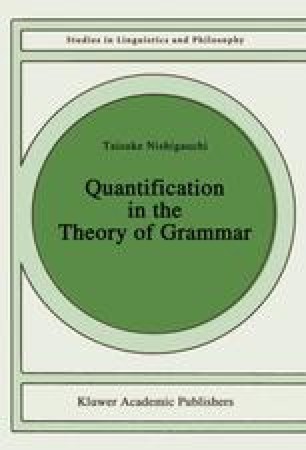 Quantification in the Theory of Grammar pp 116-176 | Cite as

Chapter
Part of the Studies in Linguistics and Philosophy book series (SLAP, volume 37)

The purpose of the present chapter is to discuss the status of wh-phrases as quantificational expressions. In particular, we will address the question of how the wh-expression should be characterized in terms of its quantificational force. We will see that the syntactic and semantic behavior of constructions in Japanese involving the class of words which Kuroda (1965) very pertinently referred to as ‘indeterminate pronominals’ provides an interesting insight to the issue at hand. The ‘indeterminate pronominals’ essentially correspond to wh-expressions.1

Relative Clause Matrix Clause Existential Quantifier Quantificational Expression Quantificational Force
These keywords were added by machine and not by the authors. This process is experimental and the keywords may be updated as the learning algorithm improves.
This is a preview of subscription content, log in to check access.