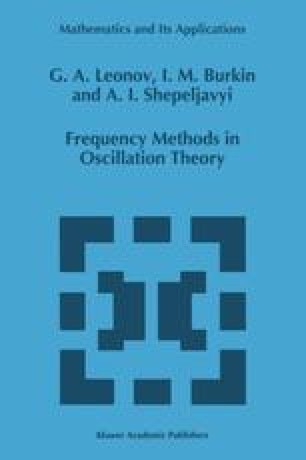 Chapter
Part of the Mathematics and Its Applications book series (MAIA, volume 357)

The physical realizability of a cycle depends on its stability. Therefore the theory of local stability of closed trajectories [109, 259, 277, 301] operating in terms of multiplicators of equations in variations was formulated long ago. At the begining of the 60-s G.Borg, P.Hartman and C.Olech [73, 142, 143] suggested a new approach to the investigation of orbital stability which, firstly, is not restricted by closed trajectories and, secondly, is much more effective in performing computational procedures. The further development of this approach [66, 201, 205, 208, 209, 210, 212] led to the understanding that it has much in common with the proof of upper estimates of Hausdorff dimension of attractors [21–23, 112, 148–150, 152, 340, 352]. Therefore, it is by no means accidental that the application of these methods to the problem of stability in the large gives a remarkably similar results. Mutual penetration of the present directions helped to formulate a point of view on the Hausdorff measure of a compact set, represented along trajectories, as an analogue of the Lyapunov function. One of the main results obtained was the introduction of a Lyapunov function into estimates of the Hausdorff dimension of attractors [214, 215], which made it possible to generalize well-known theorems of Douady and Oesterlé [112] and Smith [340]. Application of the frequency theorem of Yakubovich and Kalman increases the effectiveness of estimates of dimension and stability. This chapter is devoted to a consistent presentation of these problems.

Lyapunov Function Jacobi Matrix Asymptotic Stability Exponential Stability Hausdorff Dimension
These keywords were added by machine and not by the authors. This process is experimental and the keywords may be updated as the learning algorithm improves.
This is a preview of subscription content, log in to check access.