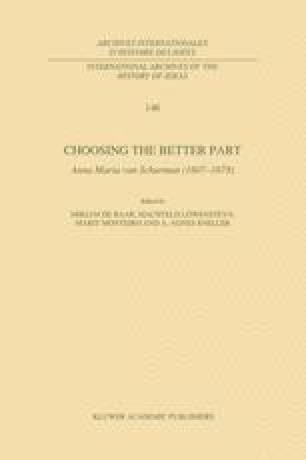 In the Eukleria seu Melioris Partis Electio Anna Maria van Schurman unequivocally states that she is turning her back on her former work.2 She actually repudiates all her earlier writings ‘which are redolent of such superficiality of mind, or an empty and worldly spirit’ and no longer wishes to acknowledge them as her own.3 Thus Van Schurman’s decision to choose a new life with Jean de Labadie’s community appears to mark the definitive break with her earlier life of scholarship. It is this choice that she wants to define in her last work — the ‘account of the truth’.4

Seventeenth Century Life Story United Province Evangelical Church Definitive Break
These keywords were added by machine and not by the authors. This process is experimental and the keywords may be updated as the learning algorithm improves.

Recently I was truly astonished at the lack of moderation in my studies, from which I formerly suffered: when, on the occasion of looking through my dissertation on the studies of a Christian Woman, which I wrote to Andreas Rivet, I could not but blush, (…) how far my thoughts were then from the admonition of our Saviour.1