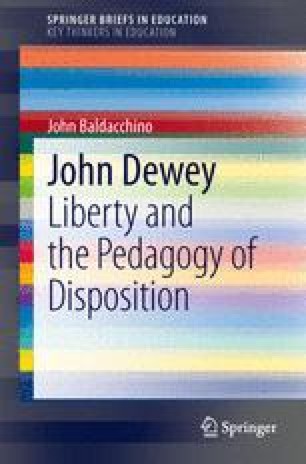 Although Dewey puts some emphasis on the role of production in terms of knowing as an act of doing the intrinsic link that one finds between his aesthetic theory and education cannot be categorized as a productivist aesthetic, as found in other progressive and liberal pedagogical experiments in America and Europe. In Dewey’s pedagogical works, such as The School and Society, one finds a distinction between his care for certain daily practices (such as gardening, cooking, carpentry, and other manual skills) which he ingrains within his school’s curriculum, and his wider theory of art. Far from a dichotomy, this distinction reflects the dynamic nature of Dewey’s work—which, one must add, was never intended as a system or a method whose parts must add up. Education is not a sealed practice, but an integral part of society. Dewey states that “it is radical conditions which have changed, and only an equally radical change in education suffices.” Even when he seems to be critical, Dewey takes industry and division of labor into serious consideration. Is Dewey being an instrumentalist or is Dewey’s sense of instrumentalism qualified by a critical disposition and a sense of freedom by which he asserts the arts and education as forms of human realization? The key to this lies somewhere before and after The School and Society was written. By before, one means his approach to experimentation, which comes from his Hegelian and later Darwinian approach to the dialectic and the randomness of growth through experimentation. By what comes later, one means Dewey’s theories of education and the school (which gain prominent visibility in The Child and the Curriculum and The School and Society), his approach to liberalism and democracy (as they emerged from Democracy and Education and what he wrote in the early 1930s) and then his aesthetic theory, which we identify with Art as Experience. The subtlety by which Dewey qualifies instrumentality is often missed and confused with a mechanistic objectification of educational value. What is, perhaps, the most confusing aspect of Dewey’s theory of instrumentalism, is somewhat redeemed by the very fact that Dewey’s investment in democracy was always marked by an argument that asserts openness and change. Thus any talk of educational value cannot be frontloaded by a list of musts or a foundational assumption of necessities. Rather, as we find in Dewey’s approach to the school, there is a need to continuously assess the relationship between knowing and doing, while accepting the fact that this relationship always runs the risk of becoming reified, resulting in a school that becomes alien to society in general and the communities that form it in particular.